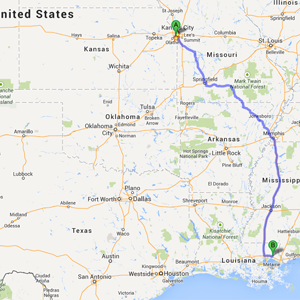 Your staff moved our household goods from Overland Park, Kansas to Louisiana 2 weeks ago. I would like to share with you our experience and you can feel free to share this internally and with the world!

When we decided to move, we were on a short time table. We had to be out of our house on 2/19 and into our new house on 2/22 . I contacted several local movers and was comparing, not only price, but customer service.

Your rep, Larry Wheeler came to our house and was very professional and cordial. He explained the entire process, took a visual inventory, discussed all of your services, and said he would get back with me on a price and information pertaining to meeting our date requirements.

He followed up promptly, with a good price, and a set delivery date of 2/22. Most of the other movers would only give me a delivery “window”.

I was packing most of the items myself, and he was able to get boxes to me and in a timely manner. It’s obvious he has done this a time or two, because we had the exact number of boxes that we needed.  The day of loading, Jeremy, Mike, and the crew came to the house. They were very professional, introduced themselves individually, and promptly began wrapping and loading. Tracy visually scanned the load and immediately took control of the inside of the truck. Jeremy was very efficient in his inventory, Mike was excellent in organizing the process and insuring that everyone was staying on task.

My wife left to pick up lunch for the crew and became stuck in a snow bank. As I was leaving to go help her, Mike and Jeremy both said for me to take someone with me to assist. Fortunately she was able to get herself out and we were back to the house in a few minutes.

They completed the loading process earlier than expected and Tracy had us take a walk through the house to insure that there was no damage to walls or flooring and that everything was loaded.

These guys are good! 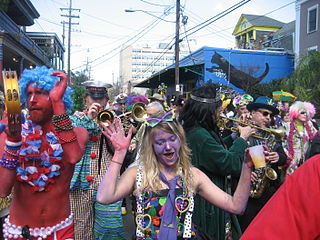 Photo by Infrogmation of New Orleans

We were moving to a suburb of New Orleans with a Saturday delivery date and right in the middle of the Mardi Gras season. There was going to be a parade 2 blocks form our house on Saturday night, so Mike had to get in and out quickly. Otherwise, the streets would be blocked and they would be stuck for the night.

When Mike and Tracy arrived at our house in Covington, LA, they were ready to rock and roll. 2 helpers showed up a little later, and they all went to work with precision and speed. They had everything in its place, the truck empty, everything cleaned up and were out in a few hours.

Suffice to say, the move went extremely well and my wife and I are very happy that we chose Gerber Moving.

Our sincere thanks to everyone involved, and we would recommend Gerber to anyone looking for a professional move.

Gerber serves the greater Kansas City Metro area, and our main office is in Bonner Springs, Kansas, just five minutes off of the I-435 freeway that circles the city.

All contents © Gerber Moving, All Rights Reserved. Site by Netmud

Member of the American Moving and Storage Association and the Better Business Bureau serving the Kansas City region including: